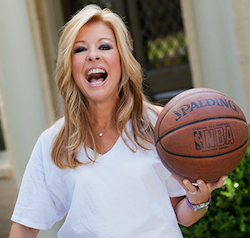 Leigh Anne Touhy is not Sandra Bullock. Touhy is the real thing.

Nothing against Bullock. She deserved her Oscar for best actress in the film adaptation of Michael Lewis’s football masterpiece, The Blind Side.

But Leigh Anne Touhy, as you’ll discover if you listen to our conversation on this edition of CNN Profiles, is bigger than the big screen. Even on radio.

The movie, The Blind Side, focused on the decision by Touhy and her white Memphis family to adopt a teenage African-American boy from a housing project called, Hurt Village.

Oher’s job, as left tackle, has been to protect the quarterback’s blind side from the giants determined to crush him.

Touhy hopes she doesn’t have to retreat to a bathroom stall like she did when the Ravens went into overtime in the playoffs. The nerves usually don’t get to her.

She gives us a scrimmage line view of the NFL. She informs us that her son, despite his immensity, is so fast off the snap, coaches have had to warn refs not to mistakenly call him off sides.

She tells us why the size of Oher’s stomach is no indication of the shape he’s in.

She addresses her husband’s comment that she has a heart the size of a pea.

She acknowledges carrying a gun everywhere she goes, except on airplanes.

And she lets us know, in very plain English, what she would have told her father if he’d disapproved of her decision to adopt a boy of Oher’s race.

One day, long ago, when Michael Oher was a teenager who didn’t know where his next meal would come from, Leigh Anne Touhy was driving down a street in Memphis. Oher was on her blind side. She noticed and turned around. That changed his life … and hers.

After listening to Touhy, many of us will find it harder to ignore our blind side.