You're So Beautiful I Can Hardly Watch the Meter 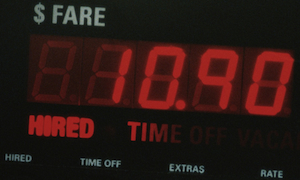 Please look carefully at these two photos (on the following page) and ask yourself which you’d rather click on. Today’s Paris couture fashion show or New York Mayor Michael Bloomberg. The choice reminds me of the line in the movie Manhattan, when Woody Allen tells his female companion in a cab: “You look so beautiful I can hardly keep my eyes on the meter.” As I was watching the Paris video feed in to CNN headquarters, I found myself drifting over to Mayor Bloomberg. He was explaining how New York’s financial meter was quickly running down, not up.

Bloomberg gave us a lesson about the economic domino effect that’s threatening to crush so many American cities and towns. He explained, in clear, simple terms, why he, and many others, believe a major infusion of federal government money is essential to keeping the dominoes at bay.