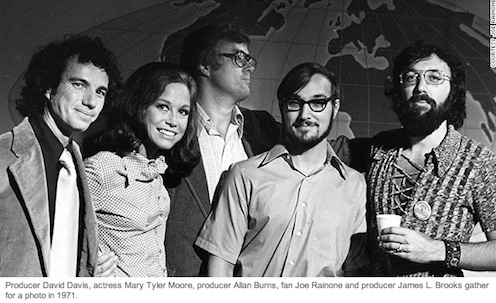 Once a success, always a success.

You know who said that?

At least nobody I know of.

Often when we see a great success, whether it’s an individual like Steve Jobs, or a product like – oh man, I better get off this Apple bandwagon. Let me think of another iconic brand.

When you think of how hooked America became on The Mary Tyler Moore Show – through its initial run in the 1970s and many years of reruns, it’s easy to imagine the successful backstory.

They can’t resist this new, refreshing storyline that’s just a little ahead of the curve on America’s evolving attitudes towards the role of women in society. A 30-year-old divorcee seeks to start life over in the big city, to seek career satisfaction and, if it comes, true love. It’s fresh. It’s new. It’s unfamiliar.

That was the problem.

You know how it is. Some leaders have a hard time saying yes to something they’ve never quite seen before. The unfamiliar is where the greatest opportunity lies. But it’s risky.

So here is the initial response from executives who listened to the pitch, as reported by our guest on this CNN Profiles, journalist Jennifer Keishin Armstrong.

“We want you to listen to some research from this guy who does our research for us and he said that people do not want to watch television about divorced people; Jews; people from New York; or people with mustaches." [1:12]

Audiences loved Mary when she was Laura Petrie married to comedy writer Rob Petrie on the Dick Van Dyke Show. But a single lady – who could leave a man to strike out on her own personally and professionally?

Risky for Mary Richards – the spirited young woman applying for job with TV news manager Lou Grant. Too risky for the real life executives. They resisted Mary’s charms at first.

Her story was too unfamiliar.

But, as Tom Waits sings, in one of his greatest songs of seduction, “we all begin as strangers.”

Wait until you hear what our guest found out about why executives resisted Mary.

Focus groups too. So much resistance.

So how did Mary make it after all?

That story – of overcoming adversity to create something original – is the story Jennifer Keishan Armstrong has brought to life in her brand new book, “Mary and Lou and Rhoda and Ted. And you can only hear it if you click the play icon at the top of this blog.

Yes, we all begin as strangers.

But if we just give a new relationship a chance – give it enough time – then we may come to realize, in the words of Tom Waits, “we really aren’t strangers any more.”