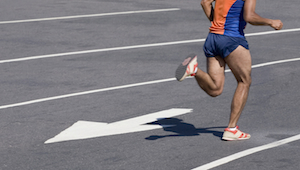 I just had lunch with a fat kid who took up running for laughs. He made the U.S. Olympic marathon team. Now, he’s a popular and influential running coach. And this week, after following him to the Whole Foods salad bar where he filled his plate with black-eyed peas and steamed vegetables, he and I trampled the 18-49 year old demo.

The marathon runner I had lunch with is Jeff Galloway. When Galloway was a kid, his father was in the Navy so the family moved a lot. 13 schools by the time he reached 7th grade.

Because of those frequent moves, Galloway never really had a chance to get involved with school sports. As a result, he says, “I was a fat, inactive, lazy kid.”

When they settled for good in Atlanta, 13-year-old Jeff Galloway’s school required the boys to choose a sport.

Galloway says he sought advice from “the other lazy kids.” They suggested track and field because the coach was lazy too. “Tell the coach you’re gonna run on the trails and then hide out in the woods.”

Galloway’s story might have ended there – an overweight kid hiding in the woods. But some of the older kids who he liked on the team insisted he come running with them.

“They started telling jokes,” he remembers. “I ran to keep up with them so I could hear the jokes – and the gossip.”