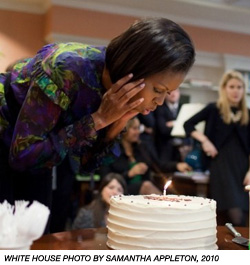 While Michelle Obama was celebrating her 50th birthday this weekend, she was unceremoniously kicked out of a club.

Big Advertising and Network Television executives call it The Demo.

THE Demo.  The demographic that advertisers have, since I was a toddler, paid a premium for, is comprised of everyone from the age of 18-49.  At 50, you’re out.

Michelle Obama is out.

Her husband, The President, is out.

Bruce Springsteen is out.  I threw him in because his presence is required on every list extolling the power of 50 plus.

I don’t need to do a whole song and dance to demonstrate how absurd and arbitrary it is to make the age of 49 a cutoff point for anything important in our society.

I will simply point you to some of the results of my entertaining investigative reporting.

Like the time I was turning 50 myself and was alerted that advertisers on The Jay Leno Show were unwilling to pay a cent for any members of Leno’s audience who were over the age of 49.

Jay Leno was out of Jay Leno’s demo!

I traced the roots of the demo here -- http://wavemaker.me/stories/dick-clark-and-rise-demo -- back to a marketing strategy developed a half century ago by the last place television network ABC -- which discovered a spike in its young audience driven in part by a new music show hosted out of Philadelphia called American Bandstand.

The host was Dick Clark.

I asked leaders in the legal profession here --- http://wavemaker.me/stories/trial-lawyers-v-18-49-demo-part-2 -- whether older jurors are more or less valuable to have on your side of an argument.

A key to selecting a jury, I learned, is to identify the one or two or three potential jurors who can persuade the others.  And those persuaders tend to skew older.

If you’re an advertiser – who would you rather have in your audience – in the jury that will decide whether your product lives or dies.

In order to prepare yourself – please peruse the category on my web site called Being 50 on Wavemaker.me.   It’s here:  http://wavemaker.me/missions/being-50

Over the coming days and weeks and months -- I will be enlisting prominent people – influencers in their professions and communities – to take this fight to the deciders of the criteria for what makes an audience valuable.

My fellow advocates may skew a little older -- no offense to the 18-34 year olds that my Google Analytics tells me comprise the largest percentage of readers on www.wavemaker.me

I’m going to enlist these influencers – and we are going to get names of the individuals who are perpetuating the myth, and the money decisions, that are made based on the 18-49 demo.

And when we get those names, we will use all our persuasive power to enlist them in our campaign.  To turn them from myth-perpetuators to myth-busters.

We will collectively say No to The Demo.  We will aim to replace it with a Yes.  The Yes of creating a new demo for a new age.

Let’s see where the wave carries us.

And do any of you know how to get this story on her reading list?

Maybe you could get it to her through her children.  The Obama children are influencers of the biggest influencers of all.  And they, too, are not in the 18-49 demo.