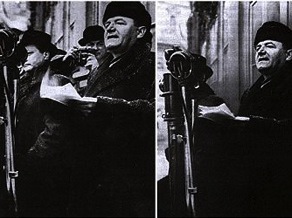 The Tiger Woods story has triggered a memory that led me to two old photos. One photo is real. One is doctored.

The Book of Laughter & Forgetting Tiger

I read about the photos 30 years ago in the Czech author Milan Kundera’s “The Book of Laughter and Forgetting.”

The original photo, on the left, was taken in February of 1948.

In Kundera’s account, this moment represented the birth of communism in Czechoslovakia.

The Czech Communist leader, Klement Gottwald, [the man on the right of the photo] had just stepped out on the balcony of a Baroque palace in Prague, before “hundreds of thousands of citizens massed in the Old Town Square. Gottwald was flanked by his comrades, with (Vladimir) Clementis [two faces to the left] standing close to him. It was snowing and cold, and Gottwald was bearheaded.”

“Bursting with solicitude, Clementis took off his fur hat and set it on Gottwald’s head.”

So, that fur hat you see on Gottwald’s head was given to him by comrade Clementis, who sacrificed his own warmth for his comrade’s.

That gesture of communist solidarity caught the attention of the Communist Party propaganda machine.

They “made hundreds of thousands of copies of the photograph taken on the balcony, where Gottwald, in a fur hat and surrounded by his comrades, spoke to the people.

Every child knew that photograph, from seeing it on posters and in schoolbooks and museums.

Four years later, Clementis was charged with treason and hanged.

The propaganda section immediately made him vanish from history and, of course, from all photographs.

Ever since, Gottwald has been alone on the balcony. Where Clementis stood, there is only the bare palace wall.

Nothing remains of Clementis but the fur hat on Gottwald’s head."E

The doctored photo on the right is all that remained – until the age of the internet brought back the original.

Those photos make me think of Tiger.