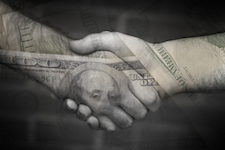 Don’t say that word! You know … “that famous term that everybody’s using,” as the United Auto Workers President Ron Gettelfinger put it yesterday. He wouldn’t bring himself to actually utter the word “bailout,” which the people at Webster’s dictionary recently noted was the most looked up word of 2008.

Gettelfinger and his industry prefer a different B word – “bridge loan.” You’ll hear more from Gettelfinger and the Big 3 CEOs today, when they get a re-do on their plea to Congress for up to 34 billion dollars in government aid – which is 7 billion more than they were asking when they went to Washington 2 weeks ago. Time is money.