After Boston, You Will Dance Again 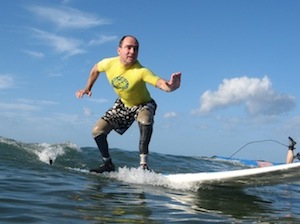 Dr. Sanjay Gupta was talking about the signature injury of the Boston Massacre last night on CNN: the limb wounds that have led to amputations.

He explained how some survivors still face a choice in the coming days and weeks over whether to try to save a limb, or let it go forever.

It can be, Dr. Gupta said, a choice between form and function.

There are actually some cases where one can survive with a badly damaged leg but would actually increase their mobility and the functionality of that leg by having it amputated and replacing it with a high quality prosthesis (many of which are not, by the way, covered by insurance.)

Our guest on this edition of CNN Profiles had to make such a choice.

His name is Dr. Jeff Cain. He is chief of family medicine at Denver Children's Hospital.

We thought his experience might help those who were too close to the bombs in Boston, or the IEDs in Iraq in Afghanistan, and the rest of us too.

He nearly lost his life piloting a single engine plane many years ago.

He found himself in the same ICU where he had made his rounds the previous day – legs severely damaged, and a choice to make in a highly medicated state of mind.

Cain was devoted to the field of medicine and to the joy of rigorous physical adventure, which he shared with his father, including skiing the most challenging mountains. But all that was suddenly transformed.

Just as it was for a 32 year old dancer named Adrianne Haslet-Davis who was watching the marathon near the finish line.

In this podcast, you will hear her describe to Anderson Cooper the shocking moment when she woke up to her new reality – that she was a dancer without a foot. A dancer determined to dance again.

I asked Jeff Cain what he believed to be the most important body part.

His answer, and his actions, have left a deep impression on those of us who listened to him.

Just as the young dancer’s words left a deep impression on those of us who heard her talk to Anderson Cooper.

And so, it turns out, this story is beyond what we imagined when we put in a call to Dr. Jeff Cain.

It’s about form and function and spirit.

Jeff Cain has a message for Adrianne Haslet-Davis: You will dance again.